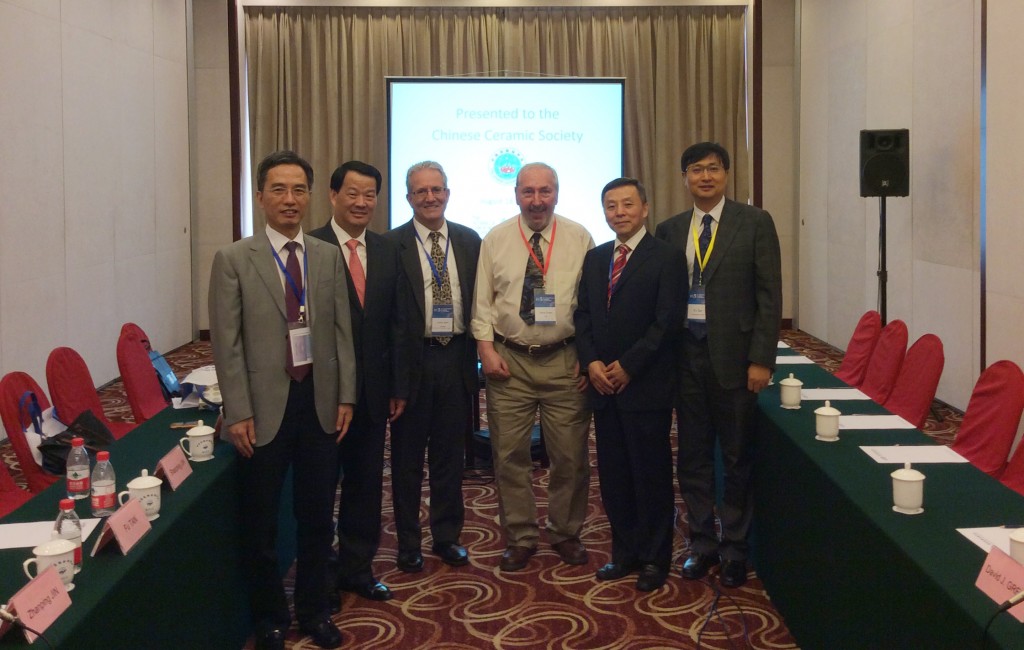 The 5th International Congress on Ceramics in Beijing, China, organized by the Chinese Ceramic Society ended yesterday, and ACerS president David Green and executive director Charlie Spahr were there. The ICCs are the flagship conferences of the International Ceramics Federation. ACerS organized ICC4 in 2012 in Chicago, Ill., USA.

Besides attending the conference, Green and Spahr met with CCerS representatives (pictured above) to update each other on ACerS and CCerS activities and to “discuss continued avenues of cooperation,” says Spahr. Also, Green and Spahr presented CCerS with a ceramic plate to commemorate their hosting of ICC5.

CCerS and ACerS already have a strong history of working together on the Pacific Rim conference series. Leaders from the two societies first met at ICC4 2012 in Chicago, Ill., and again during the International Congress on Glass in Prague last summer. Spahr says, “ICC5 has been an excellent opportunity to spend enjoyable and productive time with our colleagues from around the world. CCerS did a great job of attracting a diverse geographic audience, which also featured a very strong student delegation. The ICC meeting is developing into a durable forum for our community.”

ICC5 enjoyed a strong attendance of nearly 800 people, who came from 37 countries, including a large student contingent. The program listed more than 800 abstracts and about 600 presentations. “All the elements of the technical program were very well attended—from the opening plenary talks to the technical sessions to the poster session,” says Spahr.

On his first visit to China, Spahr says Beijing was an interesting place for a conference on advanced technology. “The city is a fascinating mix of old and new. There is the ancient part of the city with a history that goes back thousand of years, while new structures that became world-recognized during the 2008 Olympic Games are not far from the convention site.”

In ICF news, Korea was selected to host ICC8, which will take place in 2020 in Seoul. Before then, ICC6 will be in Dresden, Germany, in 2016, followed by ICC7 in Iguazu Falls, Brazil, in 2018. Additionally, the ICF named Katherine Faber president-elect. (Faber chaired ICC4 in 2012.) Danilo Suvorov of Slovenia will succeed current president Ce-Wen Nan of China when his 2012–2014 term ends.