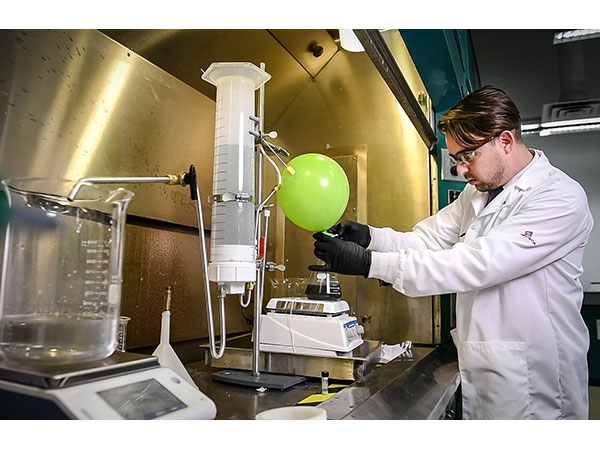 [Image above] Army researcher Anthony J. Roberts inflates a balloon with hydrogen produced from a chemical reaction between water and an aluminum nanomaterial powder discovered at the U.S. Army Research Laboratory at Aberdeen Proving Ground in Maryland. Credit: David McNally; US ARL

We report in Ceramic Tech Today on all types of groundbreaking research that scientists in academia conduct throughout the world. We should also note the research and development that the military contributes to society—much research conducted in military labs has resulted in improvements in our everyday lives.

For instance, who knew the military was responsible for duct tape and cargo pants?! If you own an iPhone, you can thank the military for GPS, multi-touch screens, and lithium-ion batteries, among other smartphone components.

But a great deal of the military’s research starts out by helping soldiers in the field—to improve weaponry and protective gear or develop new medicines and energy sources, for example. Often, many of these advances in research eventually trickle down to the civilian world.

This year, U.S. Army researchers have been testing hydrogen-powered fuel cell technology in vehicles through a collaboration with GM.

Now, researchers at the U.S. Army Research Lab who are working on smaller fuel cells to power electronics for soldiers in battle recently discovered that an aluminum nanomaterial powder they developed generates a large amount of energy when they add water to it. After further research, they found that their powder causes water molecules to split apart—separating hydrogen from oxygen.

This process, called hydrolysis, produces hydrogen when a catalyst, such as sodium hydroxide, is added to aluminum. But it typically takes extra time and resources to separate the hydrogen. When the scientists discovered their nanomaterial reaction was immediate, they realized they had stumbled onto a breakthrough in the creation of hydrogen fuel.

“The hydrogen that is given off can be used as a fuel in a fuel cell,” Scott Grendahl, materials engineer and research team leader says in an ARL news release. “What we discovered is a mechanism for a rapid and spontaneous hydrolysis of water.”

Anit Giri, a physicist with ARL’s Weapons and Materials Research Directorate, says the process doesn’t need a catalyst and can produce a great deal of energy in a short period of time.

“We have calculated that one kilogram of aluminum powder can produce 220 kilowatts of energy in just three minutes,” he explains.

“Our powder, in combination with the fuel cell, is a very good closed loop,” Grendahl says in an ARL video. “We need water for our reaction and the fuel cell gives off water, so it’s closing the loop of the fuel cell power generation cycle.”

The researchers demonstrated their discovery using a toy tank powered by the powder and water reaction. However, their material could eventually be used to 3-D-print self-destructive robots for specific air and ground missions. The team’s next step is to write a paper to document their research and develop other applications for the material.

Grendahl said their discovery can help develop more powerful batteries for soldiers in the field. “These teams are out for a short number of days, three to five days, and a lot of that depends not only on their food supplies, but on how long their supplies last in terms of their equipment, and right now that stems from lithium batteries,” he says in the news release. “If we can recharge those batteries, they can stay out longer.”

And perhaps someday their research will “trickle down” into the civilian world, where we might look forward to more powerful batteries to fuel our devices.

Watch the video below to see how the scientists’ aluminum powder mixture powers a toy tank.