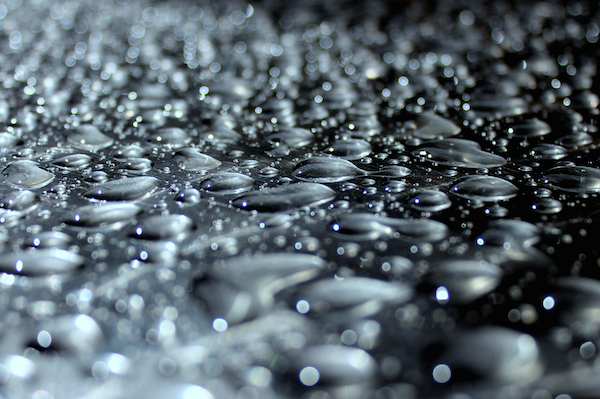 And then, sometimes—although, often too rarely—scientific progress comes together. It inspires. It excites. It makes you think.

This is one of those times.

Scientists at Columbia University are using their research to think differently about sustainable energy generation. And that approach is allowing the team to harness an invisible power source that’s available nearly everywhere—water evaporation.

Because 71% of the globe is covered in water, the potential utility of harnessing water evaporation is huge.

The team, led by biology and physics associate professor Ozgur Sahin, has engineered a way to harvest the power of evaporating water using an unlikely suspect—bacterial spores.

Spores, the dessicated, extreme condition-surviving form of bacteria, absorb water really well. When they do, they swell up, changing in size by about 6%. Although small, that size change produces enough mechanical force to lift more than 50 times the spores’ own weight—all with just a 3 second reaction time, according to a Science news report about the research. To put the spores to use, the Sahin Lab affixed thin droplets of the dessicated bacteria to a flexible cassette-tape-esque polymer tape. The scientists affixed just enough bacterial spores to get a layer about five spores-deep, or 3 μm thick, to make sure the spores bulged and shrunk in quick response to water vapor changes.

Alternating droplets on either side of the tape created tapes that could contract and lengthen like muscle fibers.

When the spores are cycled between humid and dry environments, they swell and contract—causing the tapes to grow and shrink. According to the Science news article, the tapes grew to four-times their length when placed in an environment where the humidity changed from 30% to more than 80%.

That movement is enough energy to harness and power a ferris wheel-like rotary wheel, which the researchers dubbed a Moisture Mill. The mill uses alternating humid and dry environments to create a cycle of spore swelling and contracting, which makes the wheel turn continuously as the spores cycle through the alternating environments. The mill’s rotation can even power a small toy car.

Watch the Columbia University video below to see more about the research—including other simple engine designs—and catch a glimpse of the researchers’ excitement.

And in other power-from-unlikely-sources news, scientists have also created a battery that runs on light, thanks to its titanium nitride photoanode.