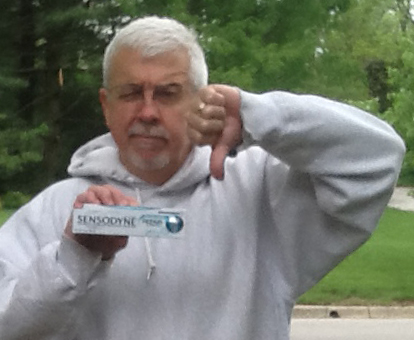 Looking for innovative NovaMin/Bioglass active ingredient in Sensodyne Repair & Protect? US consumers will not find it in the toothpaste that just went on sale. Credit: ACerS.

In the last few weeks, GlaxoSmithKline finally (and relatively quietly) began the sale of its renowned Sensodyne Repair & Protect toothpaste in the United States, and if you think maybe I am going to write one of those good news/bad news stories, I am not. There is no good news here and I have scratched a bald spot in my wrinkled gray scalp over the past five days trying to make sense of GSK’s decision.

There are a lot of international readers of this blog, so some background is necessary to avoid confusion for those who live outside North America. For years, GSK has sold a unique and remarkable toothpaste outside North America called Sensodyne Repair & Protect. Materials scientists, particularly those that work with advanced glass materials, took interest in this Sensodyne product because it contained a form of the 45S5 Bioglass invented by Larry Hench. As far as I know, it was the first broad-based consumer product that contained a bioactive ingredient that was designed to stimulate the body to rebuild dental tissue that, heretofore, was not rebuildable.

Repair & Protect was reported to be a godsend to people (including most adults) whose teeth have become annoyingly sensitive to heat and cold. Typically, the sensitivity occurs as one ages because some of the tooth enamel gets worn off over the years, which exposes the dentinal tubules that connect with the tooth nerves.

The 45S5 glass particles in Repair & Protect solve this by triggering an ionic reaction. When the glass particles contact saliva and water, the glass releases calcium and phosphate ions that form a calcium phosphate layer. The body then converts this to hydroxyapatite, which creates a physical barrier over the tubules much like the original enamel. Brush twice a day with Repair & Protect and after two weeks the heat/cold sensitivity disappears.

Quickly, GSK started bringing Repair & Protect to markets in Europe, Asia, Australia, and South America, to name a few. Anecdotally, the product seems to have been well received by consumers (despite being priced at a premium) and dental professionals. I have not read any definitive reports on sales, but according to a December 2011 story on the Consumer Goods Technology website, “As of September 2011, GlaxoSmithKline had sold 20 million units of Sensodyne Repair & Protect in more than 30 international markets.” Not bad for a few months of sales.

And it got better. According to GSK’s 2011 Annual Report, its Sensodyne Sensitivity & Acid Erosion business “grew 16%, driven by the launch of Sensodyne Repair & Protect… . Since its launch in February 2011, Sensodyne Repair & Protect has been available in 30 markets across Europe, Asia and the Middle East, with 20 additional launches planned for 2012. The Sensodyne franchise has registered double-digit growth for 11 consecutive quarters.”

GSK’s 2012 Annual Report (pdf) makes it sound like the toothpaste quickly became one of its cash cows:

But, one of the obvious omissions, marketwise, was that GSK wouldn’t (or couldn’t) sell Repair & Protect in the US marketplace. The reason? Over the years I have spoken with several glass experts at various ACerS meetings and the story they gave was nearly always the same: GSK couldn’t get FDA approval. As recently as two months ago, I was told by someone involved with the product’s development—but not the FDA process—whose understanding was that US sales was delayed because the regulatory agency was fine with the toothpaste composition, but uneasy with the term “repair.” Regardless of the cause of the delay, you couldn’t buy similar Repair & Protect in the US. Even online outlets, such as Amazon, refused to ship the product to the US.

So far, I have been unable to confirm the story about the FDA delays, and I don’t know if there is any truth to it.

What I do know is true is that in the past three weeks, I suddenly starting hearing from friends and ACerS contacts that they either had seen Repair & Protect commercials on US networks or had seen an actual box of the product in US retail outlets. Great, I thought. No more having to sneak it into the US!

But, in fact, I still was a little skeptical because just a week or so ago, when he was receiving the Toledo Glass Award, Larry Hench stated something to the effect that Repair & Protect was unavailable in the US. Coincidentally, my colleague Eileen De Guire excitedly shot out an iPhone picture of a box of Repair & Protect that she just found in a drugstore in Michigan.

Weird, I thought. Then even my chiropractor on Monday mentioned to me that he had seen an ad for the toothpaste.

Curiosity fully piqued, I jumped online to look for GSK’s press release about the start of Repair and Protect sales in the US. There wasn’t one. I did look for the product on GSK’s website and was eventually directed to the US Sensodyne website. Indeed, the main story proclaimed, “Now a Sensodyne toothpaste that can actually repair sensitive teeth.” A-ha! It is true.

But… there was also button to click on to “Learn more about Repair & Protect.” I clicked hoping to read carefully composed marketing copy about the benefits of the NovaMin/45S5 glass particles in Repair & Protect like that on the UK Sensodyne website.

Boy, was I disappointed. Instead of a discussion of NovaMin, the webpage discusses the benefits of stannous fluoride. Stannous fluoride! The webpage also has video from a dentist whose chopped up testimonial has him saying, “I’m always open to new advances…” Now, if you are old enough to remember the old “Crest with Fluoristan” commercials, you know that there is nothing “advanced” about stannous fluoride.

I should have been tipped off by the relatively quiet start of the sales of Repair & Protect in the US. Yes, GSK/Sensodyne is running TV ads in the US, but it defies logic that a major consumer product company rolls out a “billion-dollar” brand in a huge market without 1) a press release and press push, 2) social media promotions ($1 off coupon campaigns don’t count), 3) an education campaign aimed at dentists, and 4) some nearly-over-the-top promotional events. But, that is what it appears GSK is doing.

I twice requested an interview with a GSK representative to explain why GSK switched the formulation for the US version of Repair & Protect and why there was such a lackluster product rollout. GSK refused to provide an interview opportunity. Instead, I had to settle for an insipid exchange of emails with GSK’s media contact for North America consumer products, Deborah Bolding.

Bolding wrote to me, “Sensodyne Repair and Protect is a new product here in the US and does not contain NovaMin. The FDA approved the formulation. We work with regulatory authorities in each market on formulations for the specific product to be marketed and sold in that specific market. There are variances by market depending on the local regulatory body and other factors.”

When I asked for examples of other markets where Repair & Protect doesn’t contain 45S5/NovaMin, she didn’t respond other than to write, “As mentioned earlier, formulations vary by market because each market has its own regulatory authorities.”

When I requested that Bolding supply me contact information of the dentist featured in the testimonial video, Bolding responded, “I am pleased that I could address a number of your questions regarding Sensodyne Repair & Protect here in the US. Unfortunately, further comment will not be available on our strategy, rationale and future plans.”

So, advanced materials aficionados, I am sorry to conclude that if you want to buy Sensodyne Repair & Protect in the US, save your money and buy some Crest. If you want “real” Repair & Protect, you are still going to have to go abroad to buy it.

I am confident the story eventually will emerge about why GSK would invest $135 million in a US startup (NovaMin), but not leverage the technology to create a powerful product in the startup’s home nation—all at the risk of diluting and potentially damaging the Repair & Protect brand reputation outside the US. GSK is a publicly traded company, and maybe analysts and stockholders should start asking.