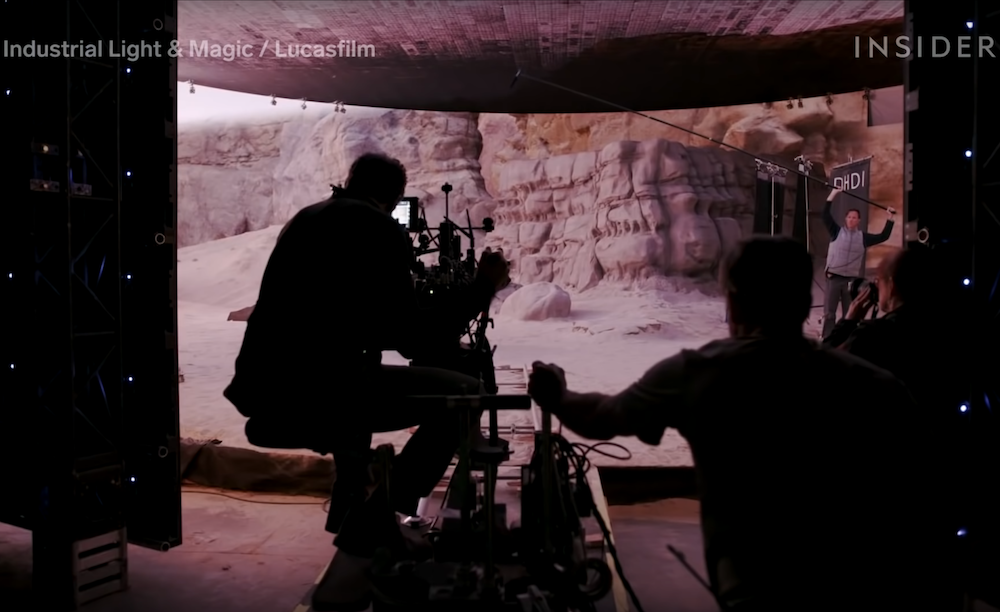 [Image above] The television series “The Mandalorian” uses a novel LED wall to create backgrounds for the show, overcoming some of the challenges faced by green-screen compositing. Credit: Insider, YouTube

I am not one of those people who signed up for Disney+ when it launched last year, but I have many friends who did. And based on their social media posts, the biggest takeaway from the new streaming service is Baby Yoda.

Technically, this character from the Star Wars television series “The Mandalorian” is called The Child, but fans quickly nicknamed the creature Baby Yoda because it is the same species as Yoda from the original Star Wars film franchise. (The true name of this species is unknown.)

This month, the popularity of Baby Yoda dropped substantially with the release of season 2 (one does not simply eat the eggs of an endangered species). But another aspect of “The Mandalorian” continues to impress fans—the novel technology used to generate backgrounds in the show.

Chroma key compositing and the drawbacks of green screens

When traveling to location for a film is not possible, producers typically rely on a visual-effects and post-production technique called chroma key compositing to create backgrounds.

Chroma key compositing involves layering two images or video streams together based on color hues. A key color or color range is made transparent, and then it is replaced with content from other film or digital material.

The technique was initially developed in the 1930s using solid blue screens (blue was the key color that would be made transparent). Since the 1990s, however, green screens became more common.

Chroma key compositing is now a well-established technique in the film industry, but there still exists some challenges that come with it. In particular, colored light often reflects off the solid-colored screen and “spills” onto the subject, requiring removal during post-production. The color of the screen also generally cannot be used anywhere else in the shot, which places some limits on set and costume designers. And because of the limitations in rendering computer graphic content, movements of the camera are often restricted to a dolly track or a few preselected shots for which the content, such as lighting, is already prepared.

The cutting-edge background technology used in “The Mandalorian”, though, solves all of these problems.

Instead of chroma key compositing, “The Mandalorian” relied on an innovative virtual production workflow called ILM StageCraft, or the Volume.

The Volume is a giant LED wall that comprises 1,326 individual LED screens of a 2.84-mm pixel pitch. It is 20 feet tall, 270 degrees around, and 75 feet wide (180 feet in circumference). It includes an LED video ceiling set on top; only the floor of the Volume does not contain LEDs.

Compared to chroma key compositing—and other back- or front-screen projection technologies—the Volume allows for a dynamic shooting environment that can automatically adjust to a camera’s movement, so the background appears natural in terms of both positioning and lighting. This ability also negates the problem of light “spill” that must be removed during post-production because all reflected light from the screen matches the desired environment. And because no key color is being reserved for removal later, there are no limits on colors for set and costume design.

An American Cinematographer article explains that the idea for the Volume stemmed from work on the Star Wars movie “Rogue One” in 2016. For that movie, a large cylindrical LED wall was built for use in the space battle landings and cockpit sequences. That wall was used purely for lighting purposes, but advances in LED technology since that movie came out allowed for the Volume to leverage new panels and push the envelope on real-time, in-camera visual effects.

Of course, filmmakers have used LED walls on smaller scales for years. But “‘The Mandalorian’ is the first real demonstration of what’s possible using this technology,” a TechCrunch article says.

The video below providers a closer look at the LED wall technology, which we’ll likely see much more of across the film industry in the near future.