Wired Magazine reported last week that 28 years of wind data from the National Centers for Environmental Prediction and the Department of Energy have been analyzed to study geographical distributions, persistency of winds, intermittency issues and global climate effects of large-scale energy extraction of high-altitude winds. The analysis titled “Global Assessment of High Altitude Wind Power” is published in the online journal Energies by Cristina Archer at the Department of Geological and Environmental Sciences, California State University, Chico, and Ken Caldeira at the Department of Global Ecology, Carnegie Institution of Washington, Stanford.

Most concepts are still at an early stage of development, in which patents have been obtained. But neither business entities nor commercial-scale prototypes exist. No high-altitude wind power technology to date has produced a prototype that has been tested long enough to provide a solid record of electricity generation and associated costs.

One mechanical concept the researchers look at is an Italian technology called Kite Gen. Conceptually, Kite Gen would consist of several tethered airfoils (kites) connected to a ground-based generator with two lines, which are pulled and released by a control unit. The energy generated during the traction phase is greater than the energy needed in the recovery phase. A single unit of 100 square meters is expected to generate 620 kW of electricity. Arrays of several kites can be arranged in a carousel configuration around a circular rail for electricity generation of up to 100 MW. This approach appears most suitable for the lowest few kilometers of the atmosphere.

But the lure is powerful. Even with seasonal movements, the jet streams are relatively persistent features of the midlatitudes in both global hemispheres. The total wind energy in the jet streams is roughly 100 times the global energy demand. The abundance, strength and relative consistency make jet stream winds particularly interesting in wind power development. It’s a huge resource and it is accessible, albeit a giant engineering challenge.

The design proposed by Sky Windpower has four rotors mounted on an airframe, tethered to the ground via insulated aluminum conductors wound with Kevlar cords. The rotors both provide lift and power electric generation. The aircraft can be lofted with supplied electricity to reach the desired altitude, but then can generate up to 40 MW of power, with angles of up to 50 degrees into the wind. Multiple high altitude wind turbines (rotorcrafts) could be arranged in arrays for large scale electricity generation. For this approach, the aim would be to capture energy closer to the jet streams. 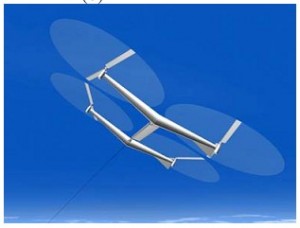 As the altitude increases, the density of the air decreases lessening the power of the wind. The authors provide the mathematics needed to assess the potential power. They even briefly cover the interference with aviation.

Regions best suited for harvesting this energy match with population centers in eastern U.S. and eastern Asia, but the fluctuations in wind strength still present a challenge for exploiting this energy source on a large scale. Caldeira says, “There is a huge amount of energy available in high altitude winds. These winds blow much more strongly and steadily than near-surface winds, but you need to get up miles to get a big advantage. Ideally, you would like to be up near the jet streams, around 30,000 feet.”

Jet streams are meandering belts of fast winds at altitudes between 20,000 and 50,000 feet that shift seasonally, but otherwise are persistent features in the atmosphere. Jet stream winds are generally steadier and 10 times faster than winds near the ground, making them a potentially a vast and dependable source of energy.

“We found the highest wind power densities over Japan and eastern China, the eastern coast of the United States, southern Australia and northeastern Africa. The median values in these areas are greater than 10 kW per square meter. This is unthinkable near the ground, where even the best locations have usually less than 1 kW per square meter.” The analysis assessments included the high altitude wind energy for the world’s five largest cities: Tokyo, New York, Sao Paulo, Seoul and Mexico City. “For cities that are affected by polar jet streams such as Tokyo, Seoul and New York, the high-altitude resource is phenomenal,” said Archer. “New York, which has the highest average high-altitude wind power density of any U.S. city, has an average wind power density of up to 16 kW per square meter.”

Now for the bad news. Caldeira says, “While there is enough power in these high altitude winds to power all of modern civilization, at any specific location there are still times when the winds do not blow.”