It’s no secret that the winter of 2013–2014 was a hard one for folks in the eastern and central United States. The unusually cold temperatures and the extreme weather that accompanied it left a lot of us longing for milder winters of years gone by.

To add insult to injury, as the cold weather took a toll on our spirits, it double-backed to give our pocketbooks a beating. Keeping a continuous and steady stream of warm air flowing through our homes is expensive—and controlling that heat a lesson in persistence and perseverance.

So news that researchers have experimentally shown that lithium cobalt oxide (LiCoO2)—the MVP of electrochemical energy storage—can be controlled over a “considerable” range is as cool as a polar vortex.

Supported by funding from the Air Force Office of Scientific Research, the team from the University of Illinois at Urbana–Champaign is not only the first to demonstrate the electrochemical modulation of a material’s thermal conductivity, but “the only demonstration of large variable and reversible thermal conductivities in any material by any approach, other than very high pressure experiments,” says Paul Braun, professor of materials science and engineering at Illinois in a press release. “Our work opens up opportunities for dynamic control of thermal conductivity and additionally, may be important for thermal management in electrochemical energy storage devices which use cathodes based on transition metals oxides such as lithium cobalt oxide,” adds David Cahill, a professor of MatSE at Illinois and one of the paper’s coauthors.

Lithium cobalt oxide, which provides cathodes their positive electrodes in Li-ion batteries, is both discharged and charged through processes known as lithiation and delithiation, respectively.

But its capacity for higher capacity is also cause for concern. Not only are batteries with the lithium cobalt oxide cathodes more reactive than those with lower capacities, but they also are more likely to overheat (thermal runaway, demonstrated in this video).

“The experimental system is designed to be simple to avoid ambiguities common in thermal studies,” says Jiung Cho, the paper’s first author. “Lithium cobalt oxide film is sputtered directly on a metal coated electrode, and then immersed in a common electrolyte.”

Using time-domain thermoreflectance (TDTR), researchers measured the thermal conductivity of the LiCoO2 thin film as part of the process of lithiation. 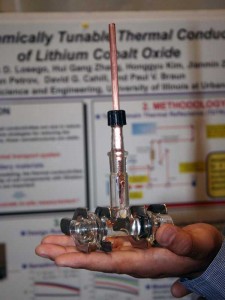 According to the release, by being able to better regulate the thermal conductivity of LiCoO2, batteries that charge faster, power further, and operate safer are made all the more possible.

However groundbreaking, demonstrating the capability is only a first step.

Adds Braun, “We suspect our findings are quite general, and that this will only be the first example of transition metal oxides with oxidation-state dependent thermal conductivities.”