Microscopy and modeling work together to improve nuclear fuel design 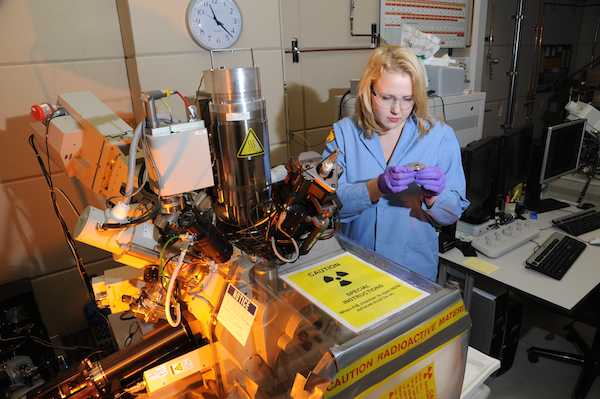 ACerS member Melissa Teague is getting up close and extremely personal with materials that most people want absolutely nothing to do with—irradiated nuclear fuel.

Nuclear fuels come in various flavors, and many of them are ceramic materials like uranium or plutonium oxides, uranium nitrides, or uranium carbides. Once those fuels have become spent, or irradiated, it’s done for. This is the stuff that’s normally stored in the bottom of giant pools, tucked deep underground, or, unfortunately, dumped overboard. No one wants it around because it’s radioactive but useless—but not to Teague.

Teague and colleagues at Idaho National Lab are pioneering research that is providing a microscale view of irradiated fuel, a 3D glimpse that has never been seen before. They know that a better understanding of what happens in nuclear fuel microstructure in response to irradiation can provide insights into how to develop fuels that are more efficient and safer. And with the DOE’s recent addition of $67 million to advance nuclear research, it seems their work is right on track. “It’s always been kind of a holy grail to understand fuel at the atomic level, but there’s never been a way to get this type of data on the small scale,” Teague says in an INL press release.

But thanks to some novel techniques developed at INL, Teague can manipulate microscopic particles of irradiated nuclear fuel and subject them to electron backscatter diffraction (EBSD) analyses. EBSD uses high-energy electrons to probe the surface of a material, and crystallographers can read the diffraction of those electrons to inform a material’s structure—like Rosalind Franklin did for DNA.

Teague collaborated with INL colleague Michael Tonks, a computational materials scientist. Tonks is head of INL’s MARMOT project, a model that simulates how irradiation microscopically changes nuclear fuel. INL also has a menagerie of additional models to computationally test a variety of other systems and processes.

Teague and Tonks, along with ACerS member and EBSD reconstruction expert Bradley Fromm, a PhD student in materials science and engineering from Washington State University, set to work together to unlock the secrets irradiated fuel had been hiding.

Combining Teague’s view with Tonks’ models and Fromm’s analyses, the team made some important discoveries. According to the press release, “The data they collected provided several important insights. First, they proved it was possible to get EBSD information from ‘really messed up’ highly irradiated fuel. The work also revealed how solid particles form, grow and migrate along crystal boundaries inside the fuel during irradiation.” These reconstructions of high burn-up mixed oxide fuel show size differences between metallic fission product precipitates (purple) in hotter (a) and cooler (b) regions of the fuel. Credit: INL

As a result, Tonks’s simulations and models are now more accurate because they incorporate real-world data. And now, MARMOT is helping other researchers predict results in irradiated fuel, helping to design more informative experiments that inch ever closer to safer nuclear energy.

The work has also caught the attention of other scientists investigating nuclear fuels. “We’ve had people from all over the world coming and asking, ‘How do you do this?’” Teague says.

According to the press release, the effects are far-reaching: “Such atomic-scale data … can help inform the development of nuclear fuel with enhanced safety and performance. The information can reveal how and why certain materials perform better than others. It can also make testing and validation more efficient by cutting down the number of time-consuming irradiation experiments required to qualify a new material.”

And the INL researchers aren’t the only ones interested in modeling what happens as nuclear reactors age. Researchers at the University of Michigan, in collaboration with Los Alamos National Lab, INL, and Terra Power, are also devising better ways to test nuclear materials. Their method uses an ion beam to mimic, in a matter of days, the degradation that occurs over years in operating reactors. More about that over here.