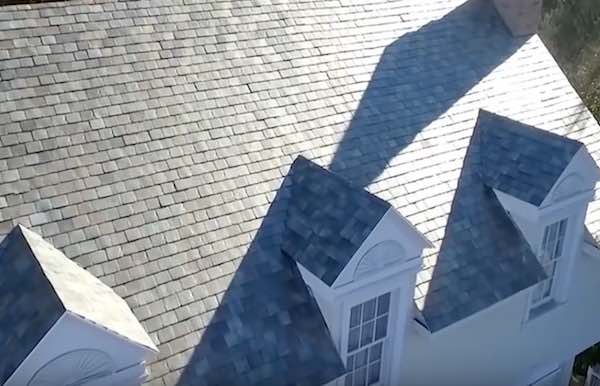 Tesla wants to integrate sustainable energy into our everyday lives—and that’s kind of a big deal.

Although most famous for making electric cars, last week Tesla unveiled its concept for solar glass roofing tiles that will expand the company’s vision for a future powered by integrated sustainable energy.

And because about 5 million new roofs are installed in the United States every year, there’s a large market for sustainable energy sitting on top of each home. A small portion of that market is already taken up by solar panels, which are installed on about 1 million U.S. homes currently.

But Tesla’s vision isn’t about adding sustainable energy—it’s about completely integrating it into our homes and lives. The company’s three-part solution consists of energy generation, storage, and transport with its own brand of solar roofing tiles, battery packs, and electric cars, respectively.

In the Tesla launch video, CEO Elon Musk shares his vision for an integrated sustainable energy future and shows off an aesthetically pleasing cadre of solar cell glass roofing tiles.

According to Musk, Tesla teamed up with solar energy company SolarCity to create a solar roof that is not just functional, but beautiful, affordable, and integrated. The solar roof tiles will be available as a joint product with SolarCity, pending approval of a proposed merger of the two companies (a shareholder vote is expected on November 17).

If that happens, Musk says that Tesla will join forces with Panasonic to manufacture the new solar cells in a Buffalo, N.Y. facility, according to a Business Insider article.

But Tesla has released little details about the technology behind its solar roof tiles, other than indicating that they incorporate “high-efficiency” solar cells.

According to a TechCruch article, Musk says the solar cells in the roofing tiles achieve 98% of the efficiency of regular solar panels, but there’s room for improvement. “He said that the company is working with 3M on coatings that could help light enter the panel and then refract within, letting it capture even more of the potential energy it carries to translate that into consumable power.”

In true Tesla style, one of the most impressive things about the new roofing tiles is how good they look. The company is offering four styles of glass roofing tiles—textured, smooth, slate-style, and terra cotta-style—most of which almost completely mask the fact that they incorporate solar cells.

To do that, the solar cells are covered by what Tesla calls a “color louver film” that hides them from view—yet still allows sunlight to pass through—and a tempered glass cover that provides the tiles with glass’s demonstrated durability and impact resistance.

Depending on the roofing tile style, that glass is textured, specially styled, or hydrographically printed—a process that prints a unique pattern on each tile—to hide the solar cells within and make the glass surface mimic the look of standard roofing materials.

Tesla claims that due to glass’s durability, the solar roof should last two to three times longer than traditional roofs because of its toughness against even harsh elements like hail.

Musk says that Tesla’s newly created “special glass technology group” developed the glass roof tiles and that it will also incorporate the same glass technology into the company’s new Model 3 automobile, according to a Business Insider article. “’It is using a lot of techniques from the automotive glass business and, in case it wasn’t obvious with the announcement, Tesla has created a glass technology group with some really phenomenal people,’ Musk said on the call.”

But the solar roof is only part of Tesla’s vision to move the world away from fossil fuels and towards sustainable energy. Last week’s launch also debuted the company’s Powerwall 2, a residential battery system that serves as its integrated home energy storage solution. The Powerwall 2 offers twice as much energy storage and power output as the original Powerwall battery and costs $5,500.

Tesla mentioned no price tag for its solar roof yet, but the company’s website says that the roof will have “lower cost that a traditional roof when combined with projected utility bill savings.”

Although Tesla isn’t the first company to try sell consumers on the idea of solar roofing tiles, it’s vision of an integrated energy solution—with solar roofing tiles for energy generation, large-scale battery packs for energy storage, and electric cars for energy transport—may be the key to selling homeowners on the branded idea of going completely sustainable with off-grid energy. But it’s not an idea without real-world challenges, so we’ll have to see how Tesla’s vision pans out.

For now, you can catch a preview of the new glass tiles in this short Bloomberg video.